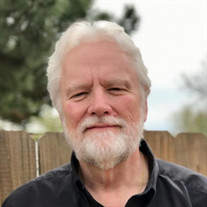 Richard Kenneth “Dick” Chapman, 67, Altus, went to be with his Lord and Savior on Friday, June 19, 2020 at the Jackson County Memorial Hospital. A private family burial will be held at the Olustee Cemetery under the direction of the Kincannon Funeral Home and Cremation Service. Memorial services will be 2:00 PM Tuesday, June 23, 2020 at Altus Christian Fellowship/Thrive Church with Glenn Shaffer officiating. The family will receive friends from 6:00 – 8:00 PM Monday, June 22, 2020 at the Kincannon Funeral Home. Dick was born on November 27, 1952 in Altus, Oklahoma to Orvel Kenneth and Carolyn (Howard) Chapman. He grew up in Olustee and Altus and graduated from Altus High School with the class of 1971. Dick married Opal (Wilson) on August 6, 1976 in Oklahoma City, Oklahoma. He pastored in Altus for thirty-three years. Dick had a life-long passion for people, teaching the word and bringing others into a personal relationship with Christ. Known for his quick wit and one-liners, his sly grin was often paired with twinkling eyes, eyes that suggested he was again considering sneaking up on one of his grandchildren. He maintained a vast collection of trinkets and treasures to include knives, a sword, collectible pens, and an assortment of historical documents that celebrated American history. There were no strangers in his home, where he’d greet you with a hug only a father could give. Family and friends always enjoyed an open invitation to a good meal, movie, and to sit down and listen to some of his favorite songs. Above all else his greatest legacy and joy were his calling to be a husband, father, and grandfather. He was preceded in death by his father, Orvel Chapman, and brother-in-law, Ed Dufresne. Survivors include his wife, Opal, of the home; six daughters, Angela Rogers and husband, Clint, of Tulsa, OK, Michelle Gallagher and husband, Daniel, of Huntsville, AL, Heather Kirby and husband, Kory, of Altus, OK, Rebecca Snyder and husband, Ryan, of Memphis, TN, Kathryn Chapman of Tulsa, OK, and Elizabeth Schettler and husband, Jesse, of Boulder, CO; 13 grandchildren, Evangeline, Bryson and Rosalyn Rogers, Genevieve, Hudson, Eloise and Silas Gallagher, Kennedy, Erick and Kaleb Kirby, and Adelaide, Arthur and Titus Snyder; his mother, Carolyn Chapman; a brother, David Chapman and wife, Lynette; two sisters, Patrice Thompson and husband, Bob, and Nancy Dufresne; and many other family members and friends. In lieu of flowers or other gifts, donations may be provided to the Freefunder campaign at http://ffnd.co/9dFKpw Online tributes may be made at kincannonfuneralhome.com

Richard Kenneth &#8220;Dick&#8221; Chapman, 67, Altus, went to be with his Lord and Savior on Friday, June 19, 2020 at the Jackson County Memorial Hospital. A private family burial will be held at the Olustee Cemetery under the direction of... View Obituary & Service Information

The family of Richard Kenneth "Dick" Chapman created this Life Tributes page to make it easy to share your memories.

Send flowers to the Chapman family.