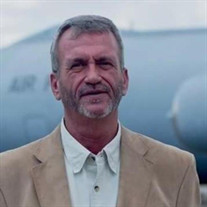 Richard Stephen “Rich” Guinan, 55, Altus, passed away on Sunday, April 4, 2021 at his home. A rosary will be held at 6:00 PM Thursday, April 8, 2021 at the Kincannon Memorial Chapel with a visitation to follow. A Funeral mass will be held at 3 p.m. Friday, April 9, 2021 at the Prince of Peace Catholic Church with Father Joseph David officiating and Father Piotr Gadja as concelebrant. Inurnment will follow at a later date in the Arlington National Cemetery in Dallas, Texas. Arrangements are under the care of the Kincannon Funeral Home and Cremation Service. Richard Stephen “Rich” Guinan was born on May 6, 1965 in Rochester, New York to John “Jack” and Dorothy (Beisheim) Guinan. He grew up in Rochester and entered into the US Air Force in 1984. Rich served during many tours. He married Melissa Camp on September 9, 1995 in Erlanger, Kentucky. He received his Bachelor’s Degree in History for Wayland Baptist University. Rich retired from the Air Force in 2007 and was currently working as the Historian at Altus Air Force Base. He was a member of the St. Francis and Prince of Peace Catholic Churches and enjoyed tinkering in his garage. His parents preceded him in death. Survivors include his wife, Melissa, of the home; two daughters, Abaigeal Harthun and husband, Alan, and Eleanor Guinan; a son, Jacob Guinan; two sisters, Donna Cairns and husband, Jim, and Sandra Engstrom and husband, Loren; a brother, Dan Guinan and wife, Karen; and his nieces and nephews, Jimbo and Emily Cairns, Georgia Mitchell and Emma Guinan. Online tributes may be made at kincannonfuneralhome.com

The family of Richard S. Guinan created this Life Tributes page to make it easy to share your memories.

Send flowers to the Guinan family.