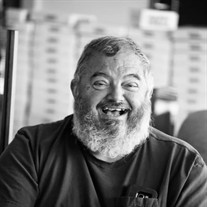 Richard Alan “Papa” Guynes, 67, Altus, passed away on Sunday, February 14, 2021 at the Comanche County Memorial Hospital in Lawton, Oklahoma. Celebration of Life services will be held at 2:00 PM Saturday, February 20, 2021 at the First Christian Church with Pastor Ben Partin officiating. Services are under the direction of the Kincannon Funeral Home and Cremation Service. Richard Alan Guynes was born on December 17, 1953 in Hereford, Texas to Paul Eugene “Gene” and Francis Louise (Petty) Guynes. He grew up in Hereford and graduated from Hereford High School in 1972. He married Lawona Stephenson on April 10, 1976 in Claude, Texas. He attended aircraft mechanic school and spent his life building and working on aircraft, which was his passion, later retiring from Altus Air Force Base. He married Sherri (Higgins) Clark on December 19, 2009 in Hollis, Oklahoma. He enjoyed woodworking and operated his own shop, RG’s Woodworking. Richard enjoyed football and spending time with his children and grandchildren. His parents preceded him in death. Survivors include his wife, Sherri, of the home; a son, Richard Andrew “Andy” Guynes; two daughters, Heather Guynes Meade and husband, Wayne, and Kendra Guynes Whitaker and husband, Matthew; a stepson, Gary Clark; four grandchildren, Brynley and Bretton Meade and Amelia and Milo Whitaker; a step granddaughter, Mila Clark Ocampo; two sisters, GeneAnn Guynes Hall and Debra Lee Guynes Hayes; and a host of other loved ones, friends and RG’s Woodworking customers. Memorial contributions may be made to the American Diabetes Association at www.diabetes.org. Online tributes may be made at kincannonfuneralhome.com

The family of Richard Alan "Papa" Guynes created this Life Tributes page to make it easy to share your memories.

Send flowers to the Guynes family.