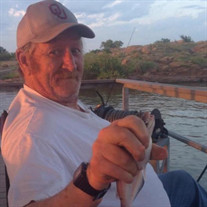 Ricky C. “Rick” Marshall, 67, of Altus passed away on May 31, 2021. Memorial services will be 10:00 AM on Tuesday, June 8, 2021 at the Kincannon Memorial Chapel. The family will greet friends beginning at 9:00 AM. Cremation and memorial services are under the care of Kincannon Funeral Home and Cremation Service. Rick was born on April 11, 1954 to Robert C. and Mary “Edna” (Roberts) Marshall in Florence, Arizona. He attended school in Arizona at Winkelman and Coolidge, later graduating from Hayden. Rick married Anita Nucci on October 14, 1984 in Altus, Oklahoma and to this union, two sons were born – Phillip and Andrew. Rick had worked at Ken’s Pizza, Bar-S, the Altus Times, and later as a store associate at Wal-Mart in the meat and bakery departments. He had continued his education at Western Oklahoma State College in Altus. Rick was a member of the Tamarack Road Church of Christ and enjoyed fishing in his spare time. He was a big University of Oklahoma football fan, as well as the Minnesota Vikings football and the Phoenix Suns basketball teams. Rick coached his sons and other kids in Altus City League baseball and basketball for over 20 years. He enjoyed classic rock music and appreciated time spent with family and his grandchildren. Rick was preceded in death by his father, Robert C. Marshall; mother, Edna Seats and stepfather, William Edgar “Ed” Seats; two brothers, Robert and Stan; and his sister, Sandy. He is survived by his wife, Anita; two sons, Phillip Anthony Marshall and Andrew Noel Marshall and wife, Joy; one brother, Charles B. Marshall and wife, Kathy; two sisters, Carol Foor and husband, Henry and Donna Romero and husband, Louie; three grandchildren, Aden Kyle, Daniel Isaiah and Austin James Marshall; two brothers-in-law, Louie Nucci and wife, Elizabeth and Robert Nucci and wife, Tammy; two sisters-in-law, Viza Haley and husband, Will and Laurie Warren and husband, Bob; as well as numerous nieces, nephews, cousins and friends. Online tributes may be made at kincannonfuneralhome.com

The family of Ricky Clyde Marshall created this Life Tributes page to make it easy to share your memories.

Send flowers to the Marshall family.