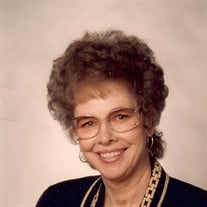 Rita Katherine Randolph George, 84, Eldorado, passed away Monday, December 17, 2018 at Plantation Village Manor in Altus. Graveside services will be 2 p.m. Wednesday, December 19, 2018 at the Eldorado Cemetery with Rev. Pete Wylie officiating. Services are under the direction of Kincannon Funeral Home and Cremation Service. Rita K. Randolph was born August 27, 1934 in Quanah, Texas to Fred and Jewel May (Geers) Randolph. She graduated from Eldorado High School with the Class of 1953 and married Billy Ray Denton the same year. Rita worked as a Eldorado School Lunch Room Supervisor, a writer for the Quanah, Texas newspaper, Dispatcher for the Quanah Sheriff Office, Bank Teller and Courier for Great Plains Bank in Eldorado, and many other odd jobs in the Southwest Oklahoma area. Rita was also a Eldorado Senior Class sponsor and chaperone on many Senior Trips for the Senior Classes. She married Robert C. George on October 23, 1970 in Oklahoma City, Oklahoma. Rita was a long time member of the Eldorado First Baptist Church and enjoyed the church activities which included taking care of the children in the nursery. She was a loving mother, grandmother, great grandmother who went beyond the call to help others, enjoyed her work and took mowing lawns on as a near favorite past time. More than anything her joy was her grand and great grand children. There were very few ballgames she missed and in our minds was the official scorekeeper. Rita was preceded in death by her parents; her husband, Robert; and a brother, Freddie Randolph. She is survived by her two sons, Terry Mark Denton and his wife, Jana; Collins Randolph Denton and his wife, Rachel; five grandchildren, Brandon Denton and wife, Melanie; Sean Denton and wife, Alisha; Tara Brown and husband, Ryan; Dustin Philips and wife, Ashleigh; and Cade Denton; great grandchildren, Parker Denton, Eli Denton, Kendall Denton, Quincy Denton, Mattie Mitchell, Sawyer Denton, Will Denton, Hadley Brown, Hudson Brown, Holden Brown and Harlow Brown; two brothers, Billy Randolph and wife, Betty; Gary Randolph; a sister-in-law, Joy Randolph and many nieces, nephews, and friends. The family will receive friends from 4:00 - 6:00 PM Tuesday, December 18, 2018 at the Kincannon Eldorado Chapel.

The family of Rita Katherine George created this Life Tributes page to make it easy to share your memories.

Send flowers to the George family.