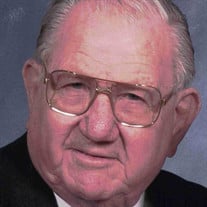 Robert “Bob” Andrew Beers, 99, Altus, passed away at his home on Wednesday, March 24, 2021. A private, family graveside service will be officiated by Reverend Jane Vaughn under the direction of the Kincannon Funeral Home and Cremation Service. Friends may sign the book Thursday afternoon until 8 p.m. and Friday morning at the funeral home. Bob was born on May 24, 1921 in Newark, New Jersey to Cornelius F. and Elsie Belle (Small) Beers. In 1943 Bob married the love of his life, Georgia Inez Block in Clovis, New Mexico. They spent 66 years and 6 days together before her death in 2010. Bob served in the United States Army for five years. He served in WWII, in Africa, before being honorably discharged as a Corporal. Bob applied was accepted in the Oklahoma Highway Patrol in 1953. During his 33 year career he served all over the state and received Trooper of the Year-1964 and the Governors’ Commendation before his retirement in 1986. At the time of his death he was the oldest living patrolman in the state. Bob was an active member of the First United Methodist Church and received several service awards. Bob was highly involved in the community and served on various boards including volunteering for the Oklahoma Veteran’s Hospital in Clinton, Jackson County Memorial Hospital, The Salvation Army, the Altus Lions Club, Retired Troopers Association, VFW, American Legion, DAV, Air Force Association, Kiwanis Clubs, Masons, Shriners, Elks Club, Republican Party, Altus City Council (12 years) and he was a judge for the Main Street Altus Chili Cook-off for twenty years. During his retirement he enjoyed playing dominos; playing golf; volunteering for church activities and events as well as bus tours that he took all over the United States. Bob was preceded in death by his parents; wife, Georgia; daughter, Barbara Ann; two grandchildren, Robert A Beers, III and Paty Spurgeon; brother, Frank; and sisters, Gladys Marcella and Doris Collins. He is survived by his sons, Robert A. Beers, II and wife, Barbara Jean of Sacramento, California and William Lloyd Beers and wife, Cathy of Enid, Oklahoma; daughter, Beverly Cullen and husband, Bernie of Evansville, Minnesota; sister-in-law, Mabel Blackwood of Altus; eleven grandchildren, Benjamin, Bryen, Brandon, Bradley, William “Bill”, and Brian Beers, Laura Spurgeon Walzer, Terry Spurgeon Grothe, Alicia Coffin Chick, Heather Thornberg Sorenson and Chad Thornberg; fifteen great grandchildren, and three great-great grandchildren. Memorials may be made to: the C O H P S, Concerned Oklahomans for Highway Patrol Society, @ PO Box 3258, Shawnee, OK 74802-3258; the JCMH Hospice @ 580-379-6900 or the charity of your choice in Bob Beers memory. Online tributes may be made at kincannonfuneralhome.com

Robert &#8220;Bob&#8221; Andrew Beers, 99, Altus, passed away at his home on Wednesday, March 24, 2021. A private, family graveside service will be officiated by Reverend Jane Vaughn under the direction of the Kincannon Funeral Home and Cremation... View Obituary & Service Information

The family of Robert A. Beers created this Life Tributes page to make it easy to share your memories.

Send flowers to the Beers family.