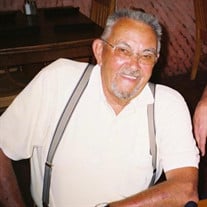 Robert Albert “Bob” Konen, 87, Altus, passed away at his home on Sunday, June 27, 2021. Funeral services will be at 10:00 AM on Wednesday, July 7, 2021 at the Kincannon Memorial Chapel. Burial with Air Force honors will follow in the Altus City Cemetery under the direction of the Kincannon Funeral Home and Cremation Service. Robert Albert Konen was born on July 17, 1933 in Newport, Kentucky to Harry A. and Evelyn (Bose) Konen. He grew up and attended school in Kentucky before joining the United States Air Force. Bob married Dollye Turkett on May 1, 1954 in Amarillo, Texas. He worked primarily as an aircraft mechanic while he was in the Air Force. Bob retired as a Chief Master Sergeant and the Superintendent of Maintenance from Altus Air Force Base after 27 faithful years. After his retirement, he worked as an electrician for M & R Electric for another 20 years before fully retiring. In his spare time, if you couldn’t ever find Bob, you could usually catch him at the golf course. His parents, wife, two brothers and a sister, preceded him in death. Survivors include his daughter, Ann Bicker and husband, Bill; a son, Bob Konen and wife, Brenda; six grandchildren, Megan Channell and husband, Steve, Andrea Davis and husband, Randy, Bobby Konen and wife, Amanda, Kortni Robbins and husband, Ryan, Cody Konen and Caden Konen; seven great grandchildren, James, Jaxon, Audrey, Caroline, Jaxon, Sutton and Rhett; and several nieces, nephews, other family members and friends. The family will receive friends from 6:00 – 8:00 PM Tuesday, July 6, 2021 at the funeral home. In lieu of flowers, memorial contributions may be made in Bob’s name to the charity of the donor’s choice. Online tributes may be made at kincannonfuneralhome.com

The family of Robert Konen created this Life Tributes page to make it easy to share your memories.

Send flowers to the Konen family.