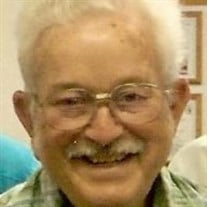 Roger Lee Hays, 82, Olustee, passed away on Friday, February 28, 2020 in Oklahoma City. Funeral services will be 10 a.m. Tuesday, March 3, 2020 in the Kincannon Memorial Chapel. Burial will follow in the Gould Cemetery under the direction of the Kincannon Funeral Home and Cremation Service. Roger Lee Hays was born on August 5, 1937 in Hollis, Oklahoma to Albert A. and Verona (West) Hays. He graduated from Ron High School (north of Hollis) with the Class of 1956. Roger married Juanita Bates in 1956 and to this union two children, David and Debra Kay, were born. He worked at the Eagle Picher Copper Mines as a welder, then, in 1968, started working at Pools Machine Shop in Altus. Roger and Virginia Crabb were married in 1972 in Hollis, Oklahoma a. He began working for the Department of Defense / Civil Engineer in 1980 as a heating specialist at Altus Air Force Base, retiring in 2003. Roger enjoyed opening up every morning for the Eagles Nest, and later, the Pit Stop, to make coffee and then hang around until his friends would arrive to break down all the world events. Following the death of Virginia in 2012, Roger married Beulah Burris February 15, 2014. He was a member of the Olustee Church of Christ. Roger was big hearted and would fix things for friends in need - all for the price of a smile. He liked to mow with his "Poppin' Johnny" tractor and work in his garden. He also appreciated old Western movies and spending time with his pet Chihuahua "Chloe" - but Roger called her "Baby". Roger was preceded in death by his parents; wife, Virginia; a son, David Hays; and a sister-in-law, Wanda Colene Hays. He is survived by his wife, Beulah; daughters, Debra Kay Sanders and husband, Joel; Anita Johnson and husband, Jim; Lynnette Burris; son, Eddy Ray Burris and wife, Cindy; two brothers, Nelson Hays; Roy Hays and wife, Suzie; his sister, Shirley Pierce; a special friend, Helen Latham; a host of grandchildren and great grandchildren; and many, many friends. The Hays family will greet friends Monday evening from 6 to 8 p.m. at the funeral home. Online tributes may be made at kincannonfuneralhome.com

Roger Lee Hays, 82, Olustee, passed away on Friday, February 28, 2020 in Oklahoma City. Funeral services will be 10 a.m. Tuesday, March 3, 2020 in the Kincannon Memorial Chapel. Burial will follow in the Gould Cemetery under the direction... View Obituary & Service Information

The family of Roger Lee Hays created this Life Tributes page to make it easy to share your memories.

Send flowers to the Hays family.