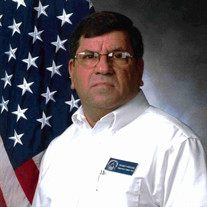 Roger Christopher Kirouac, 69, Altus, passed away on Saturday, October 30, at his home. A memorial mass will be 10:00 AM Monday, November 8, 2021 at the Prince of Peace Catholic Church with Father Joseph David officiating. Inurnment will follow at 2:00 PM at the Fort Sill National Cemetery, Elgin, with full military honors. Services are under the direction of the Kincannon Funeral Home and Cremation Service. Roger was born on October 12, 1952 at Frisbie Memorial Hospital in Rochester, New Hampshire to Ernest J. and Therese (Ruest) Kirouac. He attended St. Leo’s Catholic Elementary School in Gonic, NH and graduated from Spaulding High School in Rochester with the class of 1972. After graduation he served his country from August 1972 to August 1992 as a Noncommissioned Officer in the U.S. Air Force. His duty assignments took him all over the world, including Altus Air Force Base where he met Donna, the lovely lady whom he would spend the rest of his life with. They married on February 21, 1976 in Altus and to this union two children were born, Melissa and Todd. Roger received numerous awards and medals. He retired from the US Air Force on August 31, 1992 as a Technical Sergeant. Roger then went to work for civil service at Altus Air Force Base as an analyst until retiring after more than twenty years. As a maintenance man on various aircrafts, Roger enjoyed keeping his feet on the ground but would take a flight on the helicopters at every opportunity. Roger greatly enjoyed watching NASCAR and eating his M & M’s. He was a member of the Prince of Peace Catholic Church. Roger was preceded in death by his parents and his father-in-law and mother-in-law, WJ and Imogene Risinger. He is survived by his wife, Donna, of the home; a daughter, Melissa Robin Albright and husband, Christopher; a son, Todd Alex Kirouac and wife, Candice; two grandchildren, Joshua Taylor Gaulden and Ryker Casen Kirouac; a brother, Joseph E. Kirouac and wife, Judy; a sister, Marie Alice Kirouac; many other family and a host of friends. In lieu of flowers, memorial contributions may be made to the American Heart Association at heart.org. Online tributes may be made at kincannonfuneralhome.com

Roger Christopher Kirouac, 69, Altus, passed away on Saturday, October 30, at his home. A memorial mass will be 10:00 AM Monday, November 8, 2021 at the Prince of Peace Catholic Church with Father Joseph David officiating. Inurnment will follow... View Obituary & Service Information

The family of Roger C. Kirouac created this Life Tributes page to make it easy to share your memories.

Send flowers to the Kirouac family.