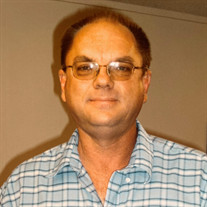 Ronald James Ladd, 60, Altus, passed away on Monday, April 18, 2022 in Altus. A memorial service will be 1:00 PM Saturday, April 23, 2022 at the House of Prayer, Blair, with Joel McCoy officiating. Arrangements are under the care of the Kincannon Funeral Home and Cremation Service. Ronald James Ladd was born on September 22, 1961 in Altus, Oklahoma to James and Jo Anne (Bannister) Ladd. He grew up in Altus and attended Altus High School where he enjoyed playing basketball. Ronald graduated with the class of 1979. He furthered his education at Western Oklahoma State College. He farmed cotton and wheat all his life in Jackson and Greer counties. Ronald was a member of the House of Prayer and he loved reading his Bible and going to church. He was an avid hunter and in his spare time always had a garden to tend to. Ronald loved the Lord and has received the ultimate healing. John 14:1-3 “Let not your heart be troubled. Believe in God and believe also in me. There are many rooms in my Father’s house. If it were not so, I would have told you. I go to prepare a place for you…so I will come again and receive you to myself, that where I am, there you may be also.” His parents preceded him in death. Survivors include two daughters, Elizabeth Cooper and husband, Dustin, and Christina Jones and husband, Dearteuy; five grandchildren, Cadence, Brance, and Crosby Cooper, Jaleigh and Grason Jones; two sisters, Bonita Shelton and husband, Larry, and Marsha King; and many other family members and a host of friends. Online tributes may be made at kincannonfuneralhome.com

Ronald James Ladd, 60, Altus, passed away on Monday, April 18, 2022 in Altus. A memorial service will be 1:00 PM Saturday, April 23, 2022 at the House of Prayer, Blair, with Joel McCoy officiating. Arrangements are under the care of the Kincannon... View Obituary & Service Information

The family of Ronald J. Ladd created this Life Tributes page to make it easy to share your memories.

Send flowers to the Ladd family.