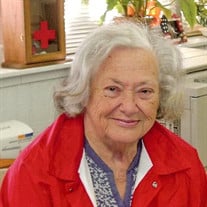 Shirley M. Mahan, 87, Altus, passed away Monday, January 7, 2019 at English Village Manor. A Celebration of Life will be held at 11 a.m. Saturday, January 19, 2019 at the Altus City Cemetery Centennial Memorial Chapel. Inurnment will take place in the Altus City Cemetery Columbarium following services. Shirley M. Rakun was born June 8, 1931 in Milwaukee, Wisconsin to Rudolph and Marie (Zadonick) Rakun. She graduated high school in San Antonio, Texas in 1950. Shirley and James Loyd Mahan were united in marriage on February 17, 1951 in San Antonio, Texas. To this union five children were born. She was a homemaker, loving wife and mother, and pastor's companion who was very involved in volunteer work most of her life. Of her few "hobbies", helping others was her most prized gift. She volunteered several years with the Red Cross in Altus and had worked for the "Welcome Wagon" as well. She continued her education at Altus Junior College, attaining her Associates of Arts Degree. Shirley was always a strong Christian, enjoyed volunteer church work, participating in the church choir, traveling, camping and spending time with her family and grandchildren. Shirley was preceded in death by her parents; husband; son, Timothy Mahan; and a brother, Ronal Rakun. She is survived by two daughters, Elizabeth Wallace; and Brenda Mahan and Tom Buchanan; two sons, James Mahan and Carla; and Thomas Mahan and Andrea; ten grandchildren, Patrick, James and Andrea Wallace; Katherine Mahan and Jatawn; Martha Dodge and Will; James Mahan and Kristie; Julian Lowell and Kimberlee; Elizabeth Jacome and Kenneth; Melissa Smith; Thomas Mahan and Kinsey; Grace and Jane Mahan; fifteen great grandchildren and many friends. Online tributes may be made at kincannonfuneralhome.com

The family of Shirley Mahan created this Life Tributes page to make it easy to share your memories.

Send flowers to the Mahan family.