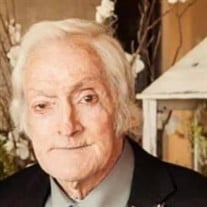 Sidney Fred Edwards, 83, Altus, passed away December, 28, 2020. Cremation has been provided by Kincannon Funeral Home and Cremation Service. Memorial services will be held at a later date. Sidney Fred Edwards was born November 19, 1937 in Hobart, Oklahoma to William and Berta (McClung) Edwards. He attended Hobart Public Schools and began working in the Hobart movie theater first as an usher, and later as a projector operator which peaked his interest in electronics. Sidney then began his TV repair business in Hobart, later moving to Mangum to work for the Vu More TV cable company. While in Mangum he met and married Mertie Thomason September 2, 1960. Sidney served in the National Guard in Mangum and Hobart before being stationed in Clarksdale, Mississippi, where the Edwards spent 3 years before he was honorably discharged in 1964. The Edwards then moved to Altus where he worked at CableCom which later became CableOne. Sidney then began working for the City of Altus in communications and electronics and retired following 18 years of service. During his retirement he was self employed as an electronics repairman and at the time of his death, Sidney was the maintenance person at Emmanuel Baptist Church. He is preceded in death by his parents, William and Berta Edwards; three sisters and six brothers. Sidney is survived by his wife, Mertie Edwards, of the home, three sons, Doug Edwards and wife, Jana; Stacey Edwards and wife, Retta; and Heath Edwards; a brother, Harry Edwards and wife, Ruth; two grandchildren, Erica Katseres and husband, Nicholas; and Joye Black; two great-grandchildren, Percy and Kassius Katseres; and a host of nieces and nephews. Online tributes may be made at kincannonfuneralhome.com

The family of Sidney F. Edwards created this Life Tributes page to make it easy to share your memories.

Send flowers to the Edwards family.