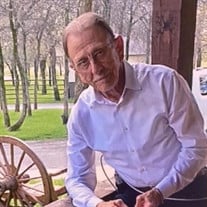 Stanley Lynn Southall, 78, Blair, passed away on Thursday, August 26, 2021 in Oklahoma City, Oklahoma. Memorial services will be 1:00 PM Wednesday, September 1, 2021 in the Kincannon Memorial Chapel with David Burk officiating. Inurnment will follow services in the Blair Cemetery under the direction of the Kincannon Funeral Home and Cremation Service. Stanley Lynn Southall was born on April 3, 1943 in Blair, Oklahoma to Peyton and Lola (Kuykendall) Southall. He grew up in Blair and graduated from Blair High School, where he lettered in basketball and baseball. He was active in FFA and was class president all four years. Stanley married Joanna Starwalt in Altus, Oklahoma in 1962. He went to work for the City of Dallas Police Department and had a very distinguished career. Stanley worked for 20 years as a police officer and field training officer at the Northeast Substation in Dallas. He worked another ten years as a detective before retiring as a Corporal. He received numerous awards including the Medal of Valor, which he received while being shot in the line of duty while pursuing an armed suspect on foot, exchanging gun fire, subsequently apprehending the suspect. Stanley also received the Life Saving Bar, in recognition of saving lives from a burning building. He served at one time as the Vice President of the Dallas Police Association. After his retirement, Stanley moved back to Blair in 1998. He farmed all his life up to the point where his health would not allow him to. Stanley enjoyed reading Louis L’Amour books, going to auctions and farm sales, cooking and collecting recipes. His parents, a brother, Clifford Southall, and two sisters, Carla Callahan and Hazel Hayes, preceded him in death. Survivors include his wife, Joanna, of the home; three daughters, Libby Scibek and husband, Mark, Jerri Ann King and husband, Paul Roy, and Julie Holland and husband, Tim; six grandchildren, Lauren Johnson and husband, James, Megan Laxson, James Laxson and wife, Amanda, Braden Graumann, Blaine Graumann and wife, Chelsea, and Kelsey Hibdon and husband, Nick; six great grandchildren, Brynlee, Cache, Aubrey, Peyton, Sutton and Lane; a brother, Melvin Southall and wife, Shirley; three sisters, June Billington, Darla Brooks and husband, Jerry, and Barbara Biddy and husband, Donnie; a brother-in-law, Tom Callahan; a sister-in-law, Flavel Southall; special recognition to the father and son bond Stan shared with Danny “Brother” James; several other family members, a host of friends and his Brothers and Sisters in Blue from the Dallas Police Department. Online tributes may be made at kincannonfuneralhome.com

The family of Stanley Lynn Southall created this Life Tributes page to make it easy to share your memories.

Send flowers to the Southall family.