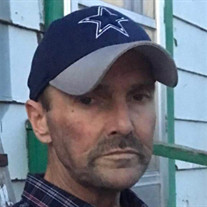 Terry Oxford, 61, Altus, passed away Tuesday, August 24. 2021 in Altus, Oklahoma. Funeral services will be held at 2 p.m. Monday, August 30, 2021 at the Kincannon Funeral Home Chapel with Wes Price officiating. Burial will follow services at the Altus City Cemetery under the direction of Kincannon Funeral Home and Cremation Service. Terry Dean Oxford was born July 9, 1960 in Altus, Oklahoma to Homer and Trina (Gibson) Oxford. He attended Altus Public Schools, then, enlisted in the U. S. Army. Terry married Robin Couch in February of 1981 and to this union three sons were born. Terry was honorably discharged from the military and began working as a dietary aide for several years. He married Julie Richardson in February of 2007. Terry was an avid outdoorsman who loved to dove hunt and spend time with his dogs. He also followed the Dallas Cowboys, the Oklahoma Sooners and NASCAR, and, had a strict “do not disturb” policy while watching any of these events. Terry collected guns and knives; enjoyed watching the history of wars on History Channel and looked forward to Kent Rollins’ cooking shows. He was of the Baptist faith and appreciated time spent with family and friends. Terry was preceded in death by his parents; his grandparents, Theodore and Vernie Hogue; and two uncles, Shann and David Gibson. He is survived by his wife, Julie; stepfather, Wes Price; sons, Rusty Couch, Levi Oxford and fiancee, Joanna Hyde, and Austin Oxford and fiancée, Amber Murphy; two half brothers, Justin and Richard Oxford; two step daughters, Albany and Mikayla; one step son, Mikel and many friends. Online tributes may be made at kincannonfuneralhome.com

The family of Terry Oxford created this Life Tributes page to make it easy to share your memories.

Send flowers to the Oxford family.