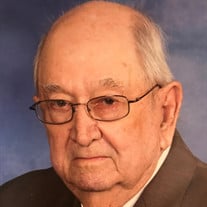 Thomas R. Francis, age 88, of Mangum, passed away Sunday, February 2, 2020 at Comanche County Memorial Hospital. Funeral services will be 2 p.m. Thursday, February 6, 2020 at the Mangum Church of Christ with Todd McRay officiating. Burial will follow services at the Riverside Cemetery under the direction of Kincannon Funeral Home. The family will greet friends from 6-8 p.m. Wednesday, February 5, 2020 at the funeral home. ​Thomas Roland Francis was born July 23, 1931 at the home place near Jester, Oklahoma to William T. and Effie L. (Denney) Francis. He attended Eastview School until its closure following his junior year of high school. Upon its closure, he transferred to and graduated from Reed High School, Reed, Oklahoma in 1950. He married Roberta Marquita Kinslow, the love of his life, on September 8, 1954 in Mangum, Oklahoma. To this union two sons, Tommy and Doug, were born. A hard worker, Tom held several jobs including work in the lumber business until 1966, at which time he opened Francis Furniture in Mangum, Oklahoma. An active member of the community, he served as President of the Mangum Lions Club, the Mangum Chamber of Commerce, and was appointed Chairman of the Greer County Public Building Authority overseeing the construction of the County Health Department Building in 2002. His self-employment as the owner and operator of a furniture, appliance, and electronic store was a labor of love that continued until his retirement with the closing of Francis Appliance in 2014. He was a long-time member of the Mangum Church of Christ. As a loving Grandfather, “Poppa” enjoyed attending and watching his grandsons play basketball and baseball with him rarely missing one of their games. He also was a fan of the Texas Rangers baseball and the Oklahoma City Thunder basketball teams. Tom was preceded in death by his parents; his wife, Marquita; brother-in-law, Dale York; sister-in-law, Ramona Roach; and sister-in-law, Sue Kinslow. He is survived by his two sons, Tommy Francis; Doug Francis and wife, Mechelle; two grandsons, Keaton and Taylor Francis; his sister, Joyce York; brother-in-law, Ronald Kinslow; along with numerous nieces, nephews, family, and friends.

The family of Thomas Roland Francis created this Life Tributes page to make it easy to share your memories.

Send flowers to the Francis family.