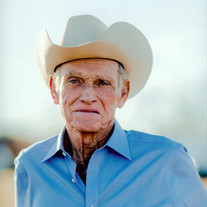 Tim Springs, 75, Eldorado, passed away Monday, May 7, 2018 in Lawton, Oklahoma. Funeral services will be 2 p.m. Friday, May 11, 2018 at the First Baptist Church in Quanah, Texas. Burial will follow services in the Eldorado Cemetery under the direction of Kincannon Funeral Home and Cremation Services. The Springs family will greet friends on Thursday evening from 6 to 8 p.m. at the Eldorado Chapel. Timothy Byron Springs was born July 23,1942 in Quanah, Texas to Ted and Oma (Dickerson) Springs. He attended school in Eldorado and graduated with the class of 1960. Tim also attended Cameron University for two years where he was active an ROTC and Agricultural Clubs. He returned home to marry his high school sweetheart, Janette Weddle on September 8, 1962 in Eldorado, Oklahoma. He was a farmer/rancher in the Eldorado area all of his life. He enjoyed building and collecting antique cars and trucks and attending antique car shows. You could always find him drinking coffee with all his friends at the local coffee shop, and was never seen without his faithful Heeler dogs. He was known as Poppy to his grandkids that he thought the world of and loved to brag about them. He was very active in his community and statewide organizations, Tim served on the OKSSA Cattle Board; was President Of the Eldorado EMS Board; served 40 years on the Eldorado School Board; served on the Century Car Club Board. He was a long time member of the Eldorado First Baptist Church where he served as Deacon, Youth Sunday School Teacher, Youth Director and frequent volunteer at Falls Creek Christian Camp. He was currently an active member of the Quanah First Baptist Church. Following the death of his first wife Janette, Tim found renewed happiness when he married Debbie Crozier on August 29, 2013, in Quanah, Texas. Tim was preceded in death by his parents and his wives, Janette and Debbie. He is survived by his daughter Shelley Johnson and husband David; son Tracy Springs and fiancée, Lisa White; sister Kathy Rizzo and husband, Bob; grandchildren, Kalley Hamilton and husband Justin; Savanna Barnett and husband Chris; Triston Springs; step granddaughter, Corie Coronado; and many friends. In lieu of flowers donations can be made to the Oklahoma Junior Simmental Association 922 South Grand Ave, Cherokee, Ok 73728. Online tributes may be made at kincannonfuneralhome.com

Tim Springs, 75, Eldorado, passed away Monday, May 7, 2018 in Lawton, Oklahoma. Funeral services will be 2 p.m. Friday, May 11, 2018 at the First Baptist Church in Quanah, Texas. Burial will follow services in the Eldorado Cemetery under the... View Obituary & Service Information

The family of Tim Byron Springs created this Life Tributes page to make it easy to share your memories.

Send flowers to the Springs family.