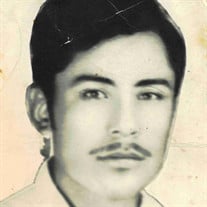 Timoteo Ramirez Rivera, Jr., 75, Altus, passed away on Wednesday, March 17, 2021 at his home. Funeral services will be 2:00 PM Saturday, March 20, 2021 in the Kincannon Memorial Chapel with Guadalupe Gonzales officiating. Burial will follow at the Altus City Cemetery under the direction of the Kincannon Funeral Home and Cremation Service. Timoteo Ramirez was born on June 19, 1945 in Dolores Hidalgo, Guanajuato, Mexico to Timoteo Ramirez and Guadalupe Rivera. He married Maria Esther Ramirez in February of 1980 in Mexico. Timoteo moved to Altus and worked as a farm laborer for most of his life. He was a hard worker and a member of Iglesia Samaria; enjoyed singing, being outdoors and spending time with his children and grandchildren. His parents and two brothers, Jesus and Santiago, preceded him in death. Survivors include his wife, Esther, of the home; a daughter, Ruby Villegas and husband, Artemio; a son, Michael John Ramirez and wife, Felicia; five grandchildren, Ivan, Braydon, Bryson, Avilynn and Jaxton; six siblings, Tomasa, Elena, Margarita, Martha, Emilia and Hilario; and many other family members and friends. The family will begin greeting friends at 12:30 pm with live music prior to the funeral services. Online tributes may be made at kincannonfuneralhome.com

The family of Timoteo Ramirez Rivera, Jr created this Life Tributes page to make it easy to share your memories.

Send flowers to the Rivera, family.