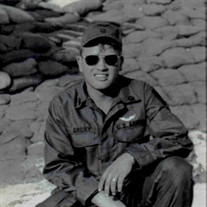 Troy Brant Drury, 71, Chickasha, passed away on Friday, April 2, 2021 at the Lawton/Fort Sill Veterans Center. Funeral services will be 2:00 PM Thursday, April 8, 2021 in the Kincannon Memorial Chapel with Daniel Ingram officiating. Burial with US Army honors will follow in the Altus City Cemetery under the direction of the Kincannon Funeral Home and Cremation Service. Troy Brant Drury was born on April 6, 1949 in Olustee, OK to Troy Laverne and Betty Lou (Billington) Drury. He joined the United States Army in 1967 serving as a crew chief during the Vietnam War and then a flight engineer at Fort Sill. In 1976, he was stationed in Neu-Ulm, Germany serving as a combat engineer. In 1979, he became a recruiter for the US Army, serving as a station commander in Oklahoma City, OK and Shawnee, OK until his retirement in 1987. He received numerous awards for his service including Recruiter of the Year and Station Commander of the Year. Troy had a lifelong love of horses and became a horse trainer and cutter upon his retirement from the US Army. Weekends were spent with a pair of orange cowboy boots and one of his many horses, competing in NCHA and ACHA cuttings. He was funny, smart, a smooth talker, and he loved spending time with his grandkids. He lived a tremendous life, and his humor and endless words of advice will be missed dearly. He was preceded in death by his parents, Troy and Betty and his brother, Charles “Chuck” Drury. He is survived by his wife, Kathy, of the home; three children, Brant Drury, Jill Haynes and husband, Dean, and Dewayne Drury; six grandchildren; seven great-grandchildren; his brother, Terry Drury and wife, Diane; his sister, Nyeeta Smith and husband, Darryl; and numerous other nieces and nephews. The Drury family will receive friends from 6:00 – 8:00 PM Wednesday at the funeral home. Online tributes may be made at kincannonfuneralhome.com

The family of Troy Brant Drury created this Life Tributes page to make it easy to share your memories.

Send flowers to the Drury family.