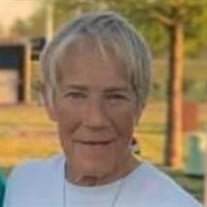 Vickie Lynn Herber, 72, Altus, passed away Friday, January 7, 2022 at Jackson County Memorial Hospital. Funeral services will be held at 10 a.m. January 15, 2022 at the Kincannon Funeral Memorial Chapel with Tony Jemes officiating. Burial will follow services at the Altus City Cemetery under the direction of Kincannon Funeral Home and Cremation Service. Vickie Lynn Herber was born June 8, 1949 in Lansing, Michigan to Harold and Vivian (Martin) Cook. She attended school in Lansing and, later in life, attended the Southwest Area Vo Tech in Altus, graduating in 1990. Vickie married Gary R. Herber on February 15, 1985 in Houston, Texas. She worked as a Certified Nurses Assistant for over 36 years beginning at the Altus House Nursing Home in the mid 1980s, Jackson County Memorial Hospital during the late 1980s and early 1990s, and the Mangum Hospital from 1998 until her retirement in 2000. Vickie was of the Catholic faith, was blessed as a caretaker, enjoyed working in her lawn and going to the VFW to play bingo. Vickie was preceded in death by her parents, Harold and Vivian Cook; husband, Gary; a daughter, Jennifer Feazel; three brothers, Richard, Duane and Jimmy Cook; one sister, Linda Cook; a nephew, Justin Souza; and a brother-in-law, Joseph Kochan. She is survived by three grandchildren, Dillon Feazel, Lisa Payne and Ashley Feazel; five great grandchildren; two sisters, Sandie Kochan and Darlene Souza (Roy); two brothers, Gary Cook and John Cook (Ramah); her sister-in-laws, Carol Cook and Diane Cook; and many friends. In lieu of flowers, the family requests donations be made to the American Heart Association. Online tributes may be made at kincannonfuneralhome.com

The family of Vickie L. Herber created this Life Tributes page to make it easy to share your memories.

Send flowers to the Herber family.