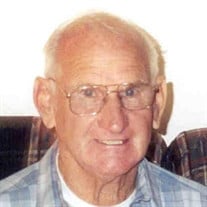 Walter J. Bell, 91, Altus, passed away peacefully at his home on Tuesday, September 14, 2021 and stepped into the presence of Jesus. Walter was a member of Landmark Baptist Church in Blair, Oklahoma. The Bell family will receive friends from 6:00 – 8:00 PM Thursday, September 16, 2021 at the Kincannon Funeral Home. Graveside services will be at 2:30 PM Friday, September 17, 2021 at Goodland Cemetery in Hugo, Oklahoma. Services are under the direction of the Kincannon Funeral Home and Cremation Service. Walter J. Bell was born on June 13, 1930 in Hugo, Oklahoma to John W. and Cora “Emma” (Combs) Bell. He grew up in Hugo and was the captain of his high school football team. He was a proud Hugo Buffalo. Walter joined the US Navy and proudly served four years, attaining the rank of First Class Petty Officer. He married Glenda J. Johnson on December 22, 1956 in Springfield, Ohio. Walter went to work for the Public Service Company of Oklahoma in 1957. After his retirement from PSO he could be found working on old cars or helping friend’s fix whatever was broken or not working. He enjoyed high school football, OU Sooner sports and the Dallas Cowboys. His most cherished moments were spending time with family, grandchildren, and friends. His parents, two brothers, four sisters and four brothers-in-law, and a sister-in-law, preceded him in death. Survivors include his wife, Glenda, of the home; a daughter, Laura M. Bell; a son, Blake Bell and wife, Diane; two grandchildren, Garrett and Ginger Bell; a brother, Bobby Bell; a sister-in-law, Mary Bell; and many nieces, nephews, other family and friends. A special thank you to the Elara Hospice for their care and support. In lieu of flowers, memorial contributions may be made in Walter’s name to St. Jude Children’s Research Hospital at stjude.org. Online tributes may be made at kincannonfuneralhome.com. Masks are required inside Kincannon Funeral Home.

Walter J. Bell, 91, Altus, passed away peacefully at his home on Tuesday, September 14, 2021 and stepped into the presence of Jesus. Walter was a member of Landmark Baptist Church in Blair, Oklahoma. The Bell family will receive friends from... View Obituary & Service Information

The family of Walter Bell created this Life Tributes page to make it easy to share your memories.

Walter J. Bell, 91, Altus, passed away peacefully at his home...

Send flowers to the Bell family.