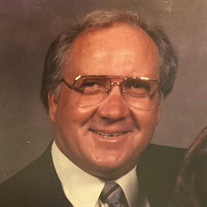 Walter Hoehne, Jr., 86, of Altus, Oklahoma passed away on Monday, April 11, 2022. Services will be at 2:00 PM on Thursday, April 14th at the Kincannon Memorial Chapel with Rev. Doug Altom officiating. Burial will follow at the Altus City Cemetery under the direction of Kincannon Funeral Home and Cremation Service. Walter Hoehne, Jr. was born on June 9, 1935 in Blair, Oklahoma to Walter R. Hoehne, Sr. and Nellie Loreta (Collier). Walter attended Blair high school, graduating with the class of 1953. He obtained his Bachelor and Master degrees from Southwestern State College in Weatherford. Walter began his career in Mt. Park as an educator and coach before moving to the Altus Public School District as the Principal of L. Mendel Rivers Elementary. He went on to become the Dean of Students at Western Oklahoma State College in Altus until his retirement in 1987. During his career Walter served as the Regional Director of the Oklahoma Education Association. Walter married Theresa Lee Berry on July 25, 1968 in Altus. One of their best pastimes was Round Dancing where he and Theresa won several awards in Oklahoma, Texas and Colorado. During their 51 wonderful years together, they put on comedy country music shows at RV parks and retirement homes. Walter enjoyed listening to music and playing the guitar, watching western movies, fishing, collecting antique firearms, RV traveling, and especially spending time with friends and family. He was preceded in death by his wife, Theresa; son, Ricky Dean Hoehne; and parents, Walter and Nellie. Walter is survived by his son, Walter Randal Hoehne; daughter, Catherine E. Anderson and her husband, William; daughter, Angela Roeder and her husband, Ed; grandchildren, Damien and Chloe Bell, Cody and Zachary Hoehne, and Daniel and Andrew Roeder; great grandchildren, Avery Monroe Roeder and Alexander William Bell; cousins, Helen Paris and Pat Hoehne; and too many other family and friends to count. Special thanks to lifelong friend, Donald Frank; neighbor, Doug Davis; and Maggie and the Tamarack Staff and Residents. Days will turn into years but I will always remember you with silent tears. Love Angel Lewis Online tributes may be made at kincannonfuneralhome.com

Walter Hoehne, Jr., 86, of Altus, Oklahoma passed away on Monday, April 11, 2022. Services will be at 2:00 PM on Thursday, April 14th at the Kincannon Memorial Chapel with Rev. Doug Altom officiating. Burial will follow at the Altus City Cemetery... View Obituary & Service Information

The family of Walter Hoehne created this Life Tributes page to make it easy to share your memories.

Send flowers to the Hoehne family.