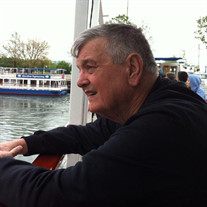 Warren Doyle McCown, 88, Altus, passed away on Friday, December 3, 2021, at The Courtyards at Magnolia Creek. A graveside service will be 2:00 PM Tuesday, December 7, 2021 at the Eldorado Cemetery. Burial is under the direction of the Kincannon Funeral Home and Crematory Services. Warren Doyle McCown was born on May 1, 1933 to Woody and Lizzie (Huckabay) McCown in Eldorado, Oklahoma. He lived in Eldorado before obtaining a bachelor’s degree at Southwestern State College in Weatherford, OK, where he also played basketball. He received his master’s degree at Oklahoma State University in Stillwater, OK. Doyle also attended several universities in pursuit of an advanced degree in math and was just short of his doctorate degree. His favorite place by far was Oklahoma State where he was a season ticket holder for 41 years and never missed a football game. He was a dyed-in-the-wool Cowboy. Doyle taught math at Northern Oklahoma College and Oklahoma State University before retiring from teaching and moving to Oklahoma City. He then worked in the accounting department in the Millwood Public Schools for many years. Doyle always had an open door for friends and families and was an ambassador for the family. He loved dogs, large and small, but Schnauzers were his favorite. He traveled to places that most of us will never see to collect rocks of all kinds. He was a gentle man that tried to get along with everyone he met. We will all miss him, and we will remember the times we had with him. He was preceded in death by his parents; sisters, Audean Helms and Modell Hulett; a niece, Vicki Graham; a great-niece and a great-nephew. He is survived by a sister; Jolene Haines; seven nieces and nephews, Bruce Harkins and wife, Polly, Joe Harkins and wife, Linda, Sandy Melton, Kevin Ganter and husband, James, Ricky Hulett and wife, Kim, Keith Haines and wife, Pam, and Reed Haines and wife, Kathy; eleven great-nieces and great-nephews, and 23 great, great-nieces and nephews. Online tributes may be made at kincannonfuneralhome.com

Warren Doyle McCown, 88, Altus, passed away on Friday, December 3, 2021, at The Courtyards at Magnolia Creek. A graveside service will be 2:00 PM Tuesday, December 7, 2021 at the Eldorado Cemetery. Burial is under the direction of the Kincannon... View Obituary & Service Information

The family of Warren Doyle McCown created this Life Tributes page to make it easy to share your memories.

Send flowers to the McCown family.