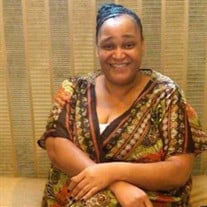 Yolanda Shirre Sample, 48, Altus, passed away on Thursday, September 10, 2020. Funeral services have been scheduled for 2:00 PM Wednesday, September 16, 2020 at the Kincannon Memorial Chapel with Pastor Avon Harris officiating. Burial will follow in the Altus City Cemetery under the direction of the Kincannon Funeral Home and Cremation Service. Yolanda was born on October 9, 1971 to Larry Don Sample and Rose Mary Lang in Altus, Oklahoma. She attended Altus Schools and graduated with the Class of 1989. She was an independent, dedicated, loyal, hard working woman. She worked for Wal-Mart 15 years, after Wal-Mart she attended Southwest Technology Center and attained her Medication Aide Certificate in 2012. She then started on her career with English Village Manor where she was currently employed at her time of death. She was raised up in true holiness at Holy Revival Center. Yolanda enjoyed reading, cooking (she believes she can cook like her mother), shopping, watching television, and spending time with her family and friends. Yolanda is preceded in death by her father and grandmothers, Eula Curry and Pearlie Mae Sample-Randle. She leaves behind two daughters, Chaundrel and Zayona McCarver; her mother and stepfather, Rose and Avon Harris; three sisters, Connie Shaw, Glenda Terry and Erin Sample; four nieces including one with a very special bond, Tameka Whitehead, Iesha Lang, Daeja Shaw, and Emiya Sample, three nephews; Mark Terry Jr., Adrian and Adaron Shaw; a great nephew, Santana Terry; five great nieces, JaNiyah Thomas, A’Miyah, JaMeyah, and AaLiyah Bridges, and Mia Rose Terry; and a host of family and friends. Online tributes may be made at kincannonfuneralhome.com

The family of Yolanda Shirre Sample created this Life Tributes page to make it easy to share your memories.

Send flowers to the Sample family.